(a) Simple evolutionary scenario of a gene family with two speciation events (S1 and S2) and one duplication event (star). The type of events completely and unambiguously define all pairs of orthologs and paralogs: The frog gene is orthologous to all other genes (they coalesce at S1). The red and blue genes are orthologs between themselves (they coalesce at S2), but paralogs between each other (they coalesce at star).
(b) The corresponding orthology graph. The genes are represented here by vertices and orthology relationships by edges. The frog gene forms one-to-many orthology with both the human and dog genes, because it is orthologous to more than one sequence in each of these organisms.

In comparative genomics and phylogenetics, the fundamental concept of orthology relates “corresponding” genes in different species: orthologs are pairs of genes which have evolved from a single gene in the last common ancestor. Among many applications, orthologs are useful to infer species trees and tend to be functionally conserved.

Orthology is a relation defined over a pair of homologous genes, where the two genes have emerged through a speciation event. 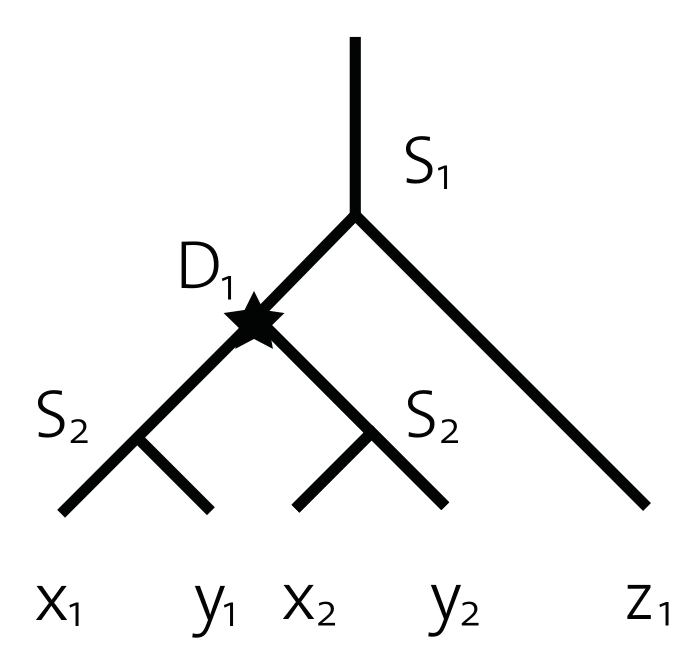 
Example pairs of orthologs are (x1, y1) or (x2, z1). Orthologs can be further subclassified into one-to-one, one-to-many, many-to-one, and many-to-many orthologs. The qualifiers one and many indicate for each of the two involved genes whether they underwent an additional duplication after the speciation between the two genomes. Hence, the gene pair (x1, y1) is an example of a one-to-one orthologous pair, whereas (x2, z1) is a many-to-one ortholog relation.

Paralogy is a relation defined over a pair of homologous genes that have emerged through a gene duplication, e.g., (x1, x2) or (x1, y2).

Homoeology is a specific type of homologous relation in a polyploid species, which thus contain multiple “sub-genomes.” This relation describes pairs of genes that originated by speciation and were brought back together in the same genome by allopolyploidization (hybridization). Thus, in the absence of rearrangement, homoeologs can be thought of as orthologs between sub-genomes.